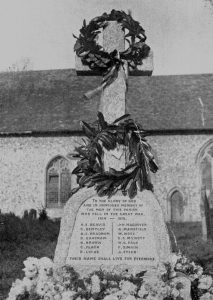 The unveiling and dedication of the war memorial

The war memorial in the churchyard was unveiled and dedicated on 24 October 1920.  Fourteen men from the village who lost their lives in the First World War are commemorated and another four names were added after the Second World War.

There are brief details below.  Please get in touch if you would like to know more or indeed have information to add.  We are particularly looking for photographs of the men as part of an ongoing project to make sure they are remembered.

Albert Edward BRADNAM 11th Battalion, Suffolk Regiment.  Died on 30/7/1916 in the military hospital at Charlton upon Medlock of wounds received on the first day of the Battle of the Somme (1/7/1916), aged 21.  Buried in the churchyard (military headstone).

A STEED It has not been possible so far to trace this man. 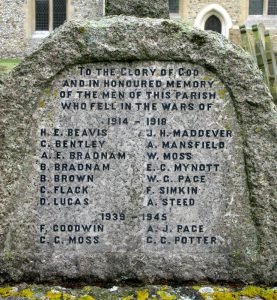 The war memorial today, with additions made after the second World War.

Frank GOODWIN Home Guard.  Died 4/9/1941 at Addenbrookes Hospital following injury, aged 21, buried in an unmarked grave in the churchyard, commemorated by the Municipal Borough of Cambridge section of the Civilian War Dead Register.

To find out more about the West Wickham War Memorial and the men on it from World War I click on link to download an acrobat file.

Advice for placing bins out during heavy winds